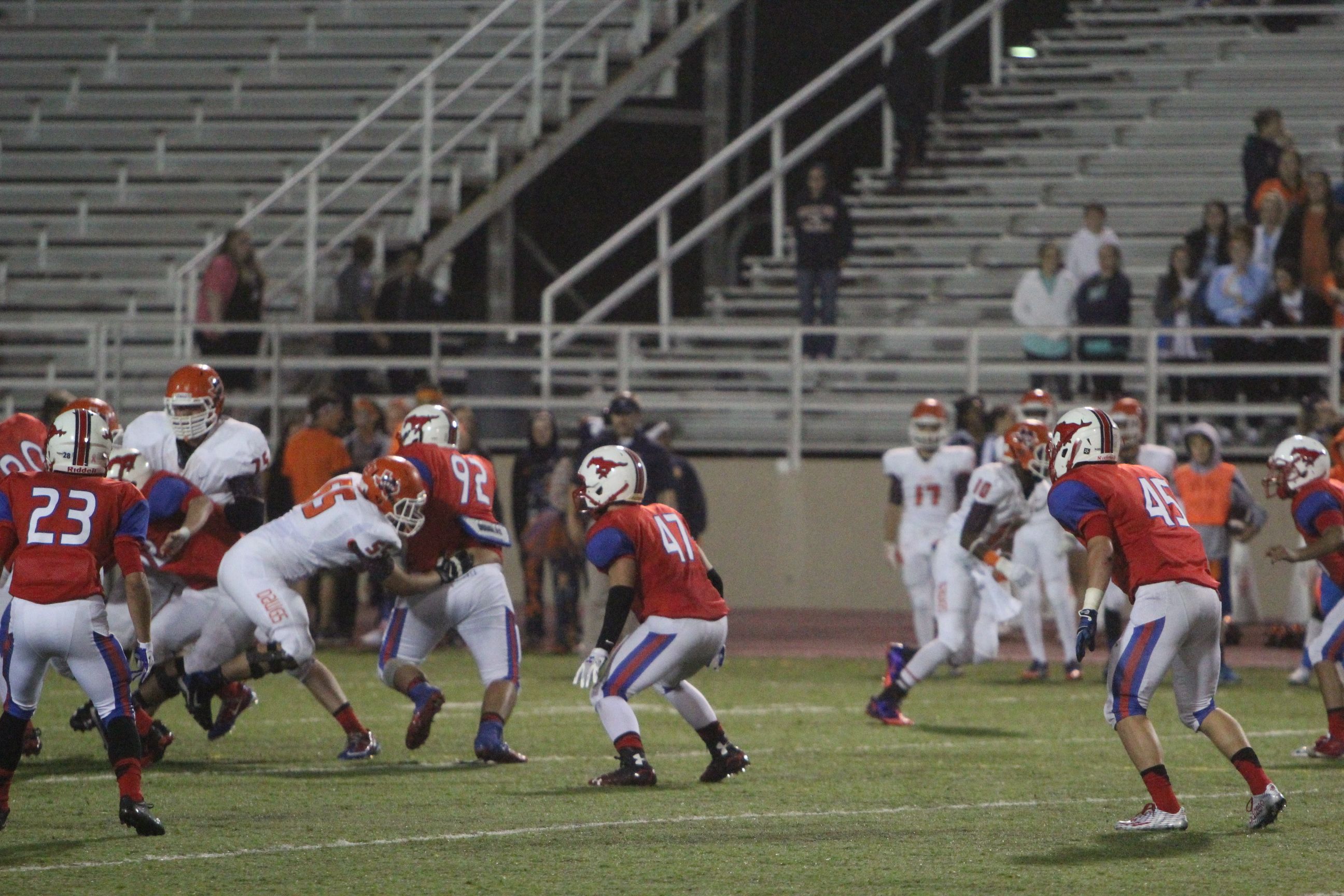 Defensive players of the week Kasra Karimi (92) and Kaleb Gillenwater (47) play their techniques at the line of scrimmage, while safety Rob Kuhne (45) and cornerback Max Beckum (23) wait for McKinney North's play to develop.

The varsity football team is 1-4 as they go into the district part of their schedule. They have beaten South Garland and lost to McKinney North, McKinney, Richardson and Highland Park.

The first game against McKinney was a close game with a final score of 26-21. The team was in a good position to make a comeback, but turnovers killed their chances of winning the game.

“After these first five games, it’s safe to say that we really need to work on ball security and not giving up so many easy turnovers,” senior left guard Kenny Lawrence said.

Aside from the turnovers, the offense moved the ball down the field pretty well. Senior Jake Hercamp was a key player against McKinney, averaging 6.1 yards per carry, with 12 carries for 73 yards and a touchdown.

Defensively, the team performed well against McKinney, holding them to 26 points and forcing three turnovers. Seniors Kasra Karimi and Freddy Contreras both forced a fumble and recovered a fumble.

In the second game of the season, against South Garland, the team pulled off its first victory with a score of 49-42. The offense was the strong point of the team throughout that game, scoring seven touchdowns and racking up 473 total yards.

“We’ve been doing a pretty good job of executing, for the most part,” Kenny said. “We’ve been successful at moving the ball down the field, but we just need to keep holding onto the ball.”

Despite having a strong group of defensive linemen and linebackers, the defense struggled holding back South Garland’s offense due to too many missed tackles.

“Our front seven has been our biggest strength so far on defense this season,” senior Arash Hajheydari said. “Our biggest problem has just been missing tackles.

The next game took place on Sept. 12 against McKinney North, a team that was ranked 11th in Division 6A. The varsity team was unable to come up with the win, losing 54-16.

“It was unfortunate, but we’ll just learn from it and keep playing to the best of our abilities,” senior wide receiver Josh Ochoa said.

The losses to Richardson and Highland Park were disappointing as well, since many students and players were excited to face the two rivals. The team lost 48-30 to Richardson, a game they were expected to win, and they lost 56-0 against Highland Park.

“In order to make an impact in our district, we need to take care of our business on and off the field, stay healthy and continue to get better in practice together as a team,” Kenny said. “We want to make sure we are well prepared for each of our games.”

Like Loading...
‹ Maze Runner movie is a faithful, gripping adaptation of popular novel
Cross country team performs well in first half of season ›