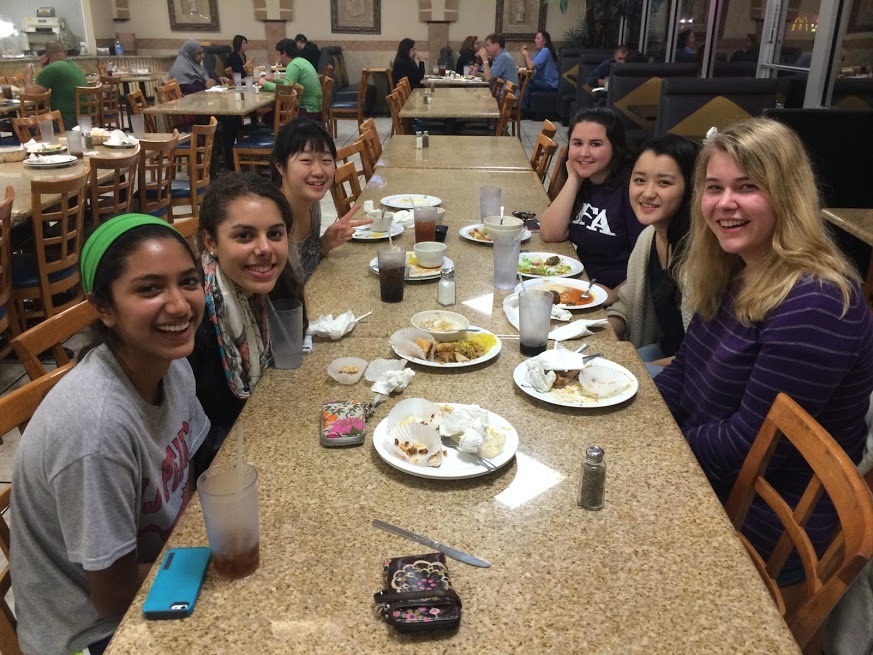 The Cultural and International Awareness Club members have dinner at Dimassi's Mediterranean Buffet on Nov. 21. Eating foreign food is one of the ways the club experiences different cultures through a social event.

The Cultural and International Awareness Club is a social club founded at Pearce this year and is mentored by teachers Mr. Sean Dowlatshahi, Mrs. Katie Buchanan and Mrs. Payal Desai. The club is attempting to promote awareness of different cultures.

“The club is intended to be a social club while also learning about culture through food and festivals, but there might be possibility for an academic component,” Mr. Dowlatshahi said.

The club went to Dimassi’s Mediterranean Buffet on Nov. 21 and plans to attend both the Chinese new year festival and the Japanese festival in January.

“Right now, the club has more of social emphasis, but we might join the JWAC to have academic competitions which would be kind of similar to AcDec in terms of the form of competitions,” Mr. Dowlatshahi said.

The JWAC, or Junior World Affairs Council, is a council designed to educate young Americans in cultures and international issues. The goal is to create international leaders.

The council hosts a WorldQuest competition in which over 4,000 schools nationwide compete for a trip to Washington, D.C. Many other schools in the DFW area, like Allen, have their own council.

“Our favorite activity that we have done was going to the Greek festival. There were so many new things to experience, like the Greek Orthodox Church, Greek food, music and mini market,” senior and co-founder Siqi Huang said.

The club meets and votes on what type of activities they will do. Plans include both the Japanese and Chinese festivals.

“Our future plans for the club are attending more festivals, going to restaurants with food based from other countries and watching foreign films,” Huang said.

The club is new this year and they hope to grow in the next several years as they attempt to attract different people to join the club and have fun.

“We started the club to have fun but at the same time experience different cultures,” senior and co-founder Hannah Winge said.