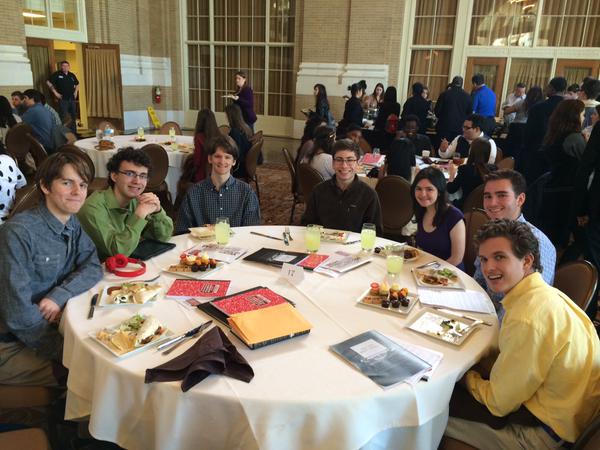 Seven members of the Pony Express staff, six of whom will be in leadership positions next year, attended The Dallas Morning News’s 24th annual High School Journalism Day and Competition on March 26. Members attended sessions in which students had discussions with journalism professionals from The Dallas Morning News staff in order to gain new insight and ideas into running a more effective newsroom next year.

“It was cool to talk to people that work in journalism and to learn some things that will help me if I choose to pursue college journalism,” sophomore Daniel Doan said.

Students attended various sessions around Union Station and the adjacent DMN campus, including one with newly-appointed editor Mike Wilson.

The sessions were followed by a luncheon held at Union Station. The luncheon featured a keynote speaker, Dr. Seema Yasmin, a former infectious diseases detective with the U.S. Centers for Disease Control and Prevention who now works for The Dallas Morning News. Dr. Yasmin shared with the audience her story of her ambitions to attend medical school in Britain only to be discouraged by her high school biology teacher.

Dr. Yasmin went on to become an infectious diseases detective at the CDC, being assigned to the state of Arizona, which included the Indian reservations throughout the state.

“She was inspiring and showed all of us how modern journalists bring their professional background to journalism,” publications adviser Walter Gast said.

While in Arizona, Dr. Yasmin was tasked by the CDC to investigate the widespread cases of Rocky Mountain spotted fever. Dr. Yasmin was told to collect ticks from wild dogs living on the reservation, from which the specimens would be sent to the CDC lab in Atlanta.

“It was a great opportunity to see the professional world of journalism,” junior Graham Rosen said. “They showed us where a career in journalism could take you.”

Like Loading...
‹ Metal detectors should be mandatory for all schools
Varsity and junior varsity baseball teams participate in 100-inning marathon ›